LinkedIn and Facebook are the most successful lead generation sites among the thousands of social networks. In comparison to others, these two networks give marketers more resources and targeted audiences for lead acquisition. It is the right SEO company in India that can help in generating leads easily.

LinkedIn is a professional networking site.

With over 530 million active users, LinkedIn helps users follow and engage with the brands they like. What’s more, the platform promotes peer-to-peer connections, making it simple for “like-minded” individuals to communicate.

If you’re a B2B business, this means LinkedIn accounts for nearly half of the social media traffic to your website. As a result, you can direct the majority of your resources toward this network.

Users can easily follow the brands they want on Facebook, giving SMBs a way to create and convert leads. And, while not as strong in the B2B space as LinkedIn, the network’s massive user base (currently 1.3 billion) is a major factor.

Which Is Better When Choosing Between the Two?

If you can only choose one of the two for your lead generation campaign, here’s what you’ll need to know to make the best decision:

LinkedIn has changed a lot in the last few years. Originally known as a job-hunting site where people looking for work could meet their next boss, the website has evolved to become a place where professionals can find and create connections.

When they receive updates on their mobile apps, most users dip in and out of the site during the day. In between meetings and during lunch breaks, some people like to swipe through their newsfeed.

• Soliciting tool and vendor feedback is one of the platform’s top three practices.

Since LinkedIn purchased Lynda.com, a large number of people have used the site to learn. LinkedIn Learning is the network’s official learning site. LinkedIn also allows users to blog on their profiles, which is a feature that advertisers can use to create loyal audiences. There are proposals to extend this to include video uploading as well.

Another appealing addition is the recently launched lead generation forms feature. LinkedIn lead generation forms, also known as Lead Gen Forms, were launched in April 2014 and are designed exclusively for smartphone users, eliminating the need to fill out contact forms when users click on supported content from their mobile phones.

Marketers can talk and engage leads in real-time with Messenger, allowing them to speed up the conversion process. You’re on your way to success if you can keep your chats human and use advertisements to get your message across.

Facebook Live is just as valuable, if not more so. According to Business to Community, Facebook Live videos meet more people and have higher engagement metrics than YouTube videos.

• The videos engaged 4.9 percent of the people reached in the first quarter of 2017. During that time, YouTube had a 2.8 percent engagement rate, while Instagram had a 2.4 percent engagement rate. 700 million people watched Facebook Live videos. Facebook is mostly used to keep in touch with friends, pass the time, promote one’s work, and support a social cause.

It’s important to consider your objectives first before making a decision. What exactly are you looking for? To whom do you market? Where do these individuals congregate?

The general rule is to use Facebook marketing for B2C and LinkedIn marketing for B2B. Beyond that, think of your audience’s professionalism; if you’re selling to highly educated people, including engineers and lawyers, LinkedIn is an obvious option. Facebook, on the other hand, would be perfect. 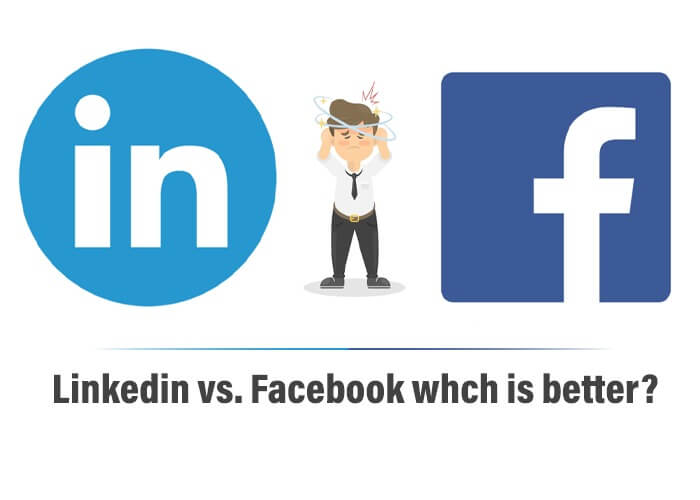 Article Name
LinkedIn vs. Facebook which is better
Description
B2Bs, in particular, have every excuse to use LinkedIn to promote their products and services. According to studies, LinkedIn generates 80 percent of global B2B leads. Furthermore, 94% of B2B marketers have a LinkedIn account.
Author
Digital Marketing Team
Publisher Name
Acme Infolabs
Publisher Logo

Take One Step for Your Business, Let’s Work Together!